See The World Through My Eyes…

After returning to Braes River from spending the weekend in Negril, I laid low in an attempt to recover from my beach shenanigans. It was nice sitting out on the veranda and completing word search puzzles. There was also never a dull moment outside. At any moment you could see some kind of animal passing by. Whether a cow, goat, or dog , it was interesting to watch.

A few days later, I was invited out to dinner by a family member. Her choice of location was Black River.

Black River is the capital of St. Elizabeth Parish, located in southwestern Jamaica. It had been years since I’d visited, but I am no stranger to Black River. While growing up, I spent every summer vacation visiting family in Jamaica. One of my family members with whom I’d often stay with worked as Inspector of Poor for St. Elizabeth until recently retiring. I can remember how excited I’d be to tag along for the ride and visit her office. Her office was literally right across the street from the ocean. I spent most days down at the library or across the street, sitting on the wall and staring out into the ocean. There was also a random rusted sinking ship that I recall being close to shore until maybe a few years ago. I’m not sure if it finally sunk or was removed, but either way it will always remain a part of my memory.

On this particular day, we dined at Paradise Ocean View. This was my first time dining there but I’d heard great reviews. The restaurant was painted in a nice vibrant orange color. A true reminder that I was in the tropics.

I walked around a bit before being seated. While doing so I spotted a fountain and as I went to check it out, to my surprise……TURTLES! They were so cute! After snapping a few pics, it was decided that we would eat outside rather than in.

It was late in the afternoon which meant we no longer had to hide from the burning sun. Lol.

We didn’t need much time with the menu as we all had already decided on oxtail. I ordered Tropical Rhythm’s Mango Carrot juice as my beverage and patiently waited for my oxtail dinner. 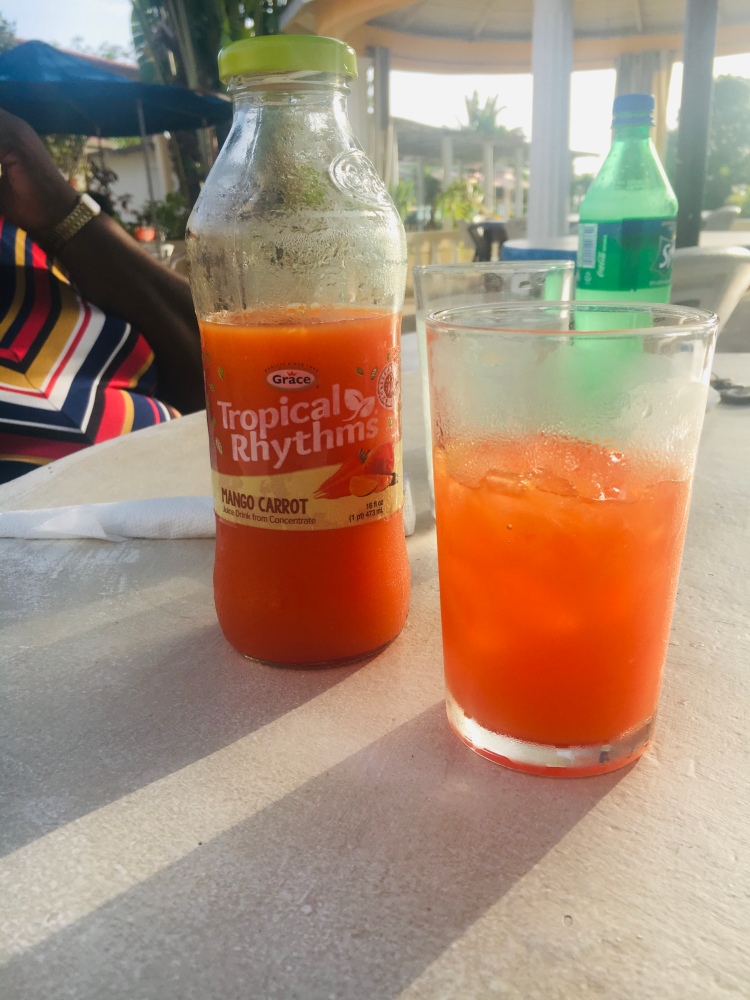 Dinner was delicious. By the time I was finished there were barely any bones left.

There weren’t many people dining at the time and the staff was very friendly so I wandered around for a bit.

I was told that I would be able to see the ocean if I walked towards the back of the property so I went to see for myself.

While walking, I became acquainted with another visitor and learned that Ocean Paradise View has been used for special events and also offered rooms for stay.

As I continued walking, I came across the “mini chalets” that are rented out to visitors who wish to stay. I immediately fell in love with the colors.

The sun began to set as I walked toward the end of the strip to the ocean. I could already smell the salt water and hear the sound of the waves on the shore.

It’amazes me that there are people who get to see this breathtaking view on a daily basis.

I’d definitely return to Paradise Ocean View to dine again and maybe even spend a night.

One thought on “The Jamaica Chronicles: An evening out in Black River.”