See The World Through My Eyes…

This was my first time travelling by myself internationally. I have to say I was a bit overwhelmed. As usual, I spent the night before my flight packing. I didn’t even have the chance to go to sleep before racing off to Newark Airport the following morning.

The flight was a little over three hours.

I originally planned on getting some shut eye during the flight but that never happened. I ended up in the dreaded middle seat, and instead spent my time re-watching Sex and the City episodes on my iPad with my arms folded in.

As we made our final approach, I had a mix of emotions. I was extremely excited, but also very anxious. I was excited to finally be returning to Jamaica after six long years, but anxious for the rush once the plane landed.

I was also very excited to see family, and to eat my beloved friend chicken meal (with the sauce). Those close to me know exactly what I’m talking about. LOL.

Apart from the breathtaking view, I always enjoyed sitting at the window seat because I didn’t feel pressured to get up right away and exit the plane once it landed. This of course backfired if I had a connecting flight and actually wanted to hustle off the plane.

For the most part, I’ve liked waiting and being one of the last people off the plane so I don’t have to deal with the pushing and the shoving and then the hassle of racing to be one of the first people on line at immigration.

Thankfully it went much smoother than expected. I didn’t have any luggage in the overhead compartment, so I just grabbed my personal bag from under the seat in front of me and shimmied my way down the aisle towards the exit.

We landed at  Sangster International Airport in Montego Bay. It had probably been about 10 years since I’d step foot in Montego Bay. During my previous visits, we always flew into Kingston since the roads made the travel to my family easier.

After completing the immigration process, and collecting my checked bags from the baggage claim, I made my way to the exit.

Now in all fairness, during the few days before my trip I was warned. I was told several times by several people that Jamaica was “hot”, “hotter than ever before”. Each and every time I responded, yes I know, its hot, its hot “here” too, its the summertime.

Whelp…. after talking my first few steps out of the airport, I was instantly backhanded by the heat.

” Nope, this nah go work”, I thought.  I needed to change my outfit and needed to do so quickly. I started scanning the crowd looking for my aunt who was picking me up from the airport. I spotted her in the distance, She walked right past me and didn’t even notice me.  I called out her name and she finally spotted me.  I ran over to her and gave a big hug, and then we made our way to the parking lot.

While she turned on the air conditioning to cool the car down, I changed into a more weather appropriate outfit.  There was no way I could have survived the 2 hr drive in long pants.

We left the airport, and headed out into the city.

We were feeling a little peckish and decided to stop at Island Grill for lunch.

There were some changes made to the menu since my last visit. But that is understood, as it had been SIX YEARS.

Until now I’m still not quite sure what “Yabba” is, but I went with that and some “Frica” chicken. I’m not gonna lie, I had fun placing that order.

I also ordered June Plum juice along with my meal. It was so tasty and thick. The real deal.

I’m not sure why I didn’t open my container before taking the pic, but it came with a festival, veggies, and rice and peas alongside the chicken. And also soup.

The food was very filling and I ended up bringing the leftovers with me. It was too much to waste.

The drive from Saint James to Saint Elizabeth was very scenic.

We made a few stops along the way.

We stopped for roasted cashews, sweet sop, and also plums. We bought two bags of Jamaican plums and devoured them. 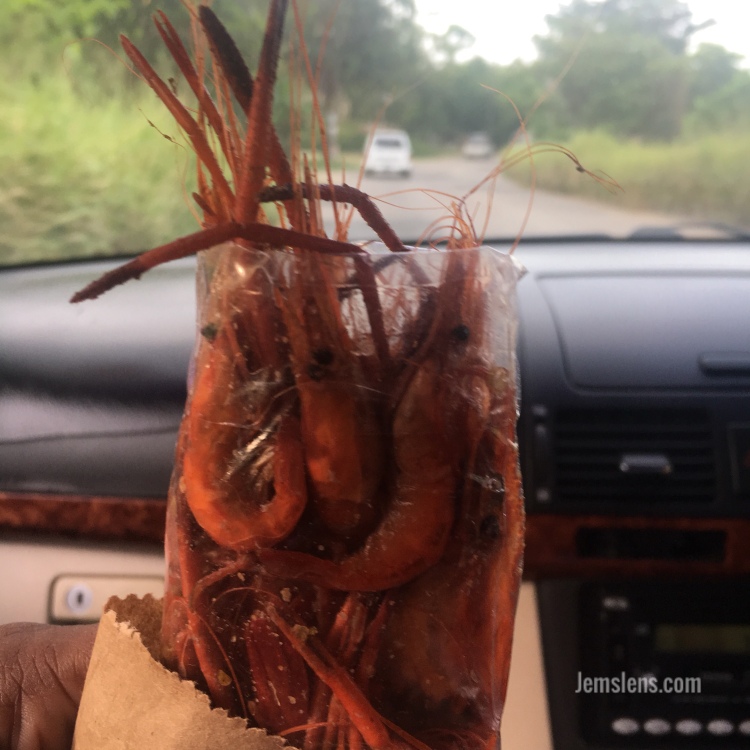 It has always been tradition for me to get my pepper shrimps at middle-quarters on the way to my aunts house.

Right before reaching her house we made one final stop for coconuts and grabbed a hand of bumpy bananas as well.

By the time we reached, it was nightfall. I unpacked what I could and prepared for the adventures to come.